Hello again, today I'll be showing two of my latest completed figures, Denny and Les of the Young Plugs, from Wargames Foundry. 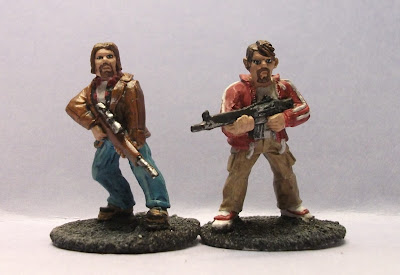 I like that Denny is wearing a jacket, and then a heavy checkered shirt underneath, and then a T-Shirt.  If gives him a sense of being over dressed, but appropriately so if he is living as a survivor in desperate time.   Len on the other hand has a sporty sweater that fits in any setting. 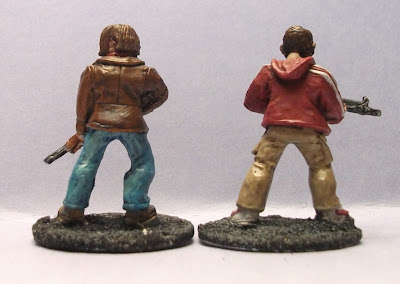 Denny comes armed with  scoped rifle, a great weapon for the zombie apocalypse.  Les is more heavily armed with an assault rifle.  My limited gun knowledge would have me label this rifle and M16, but I do recall Vampifan calling it an H&K model when he did his review of the plugs.   Either way, Len is not one to be taken lightly. 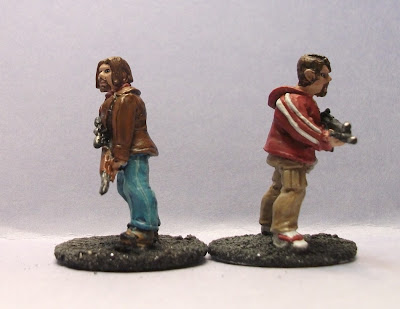 With both of them having long brown hair, I like to think of these two as brothers.   They are versatile figures that could easily be used as either survivors or gangers.  With the long hair and goatees, both of them were considered as a star character for my ATZ campaign, as they could pass as 28mm versions of myself from my early 20s.   But I think I have something else lined up.

I'm a pretty big fan of these two, by far the best figures out of the Young Plugs.  Ronnie the Worm was previously presented, and the two females from the group, unfortunately were sacrificed in my efforts to practice conversions (Iwasn't a big fan of either of them anyway).

Well thats all for this week, I hope you like Denny and Les (Foundry's names).  Comments are appreciated.