Just a little update from boredom.  After printing and mounting many, many World Works Games road tiles on cardstock, I was curious to see what sort of  setup I could have.   So I put together a little 4 foot x 4 foot city, and decided to name it: Havensburgh.  I started with many variations of Heaven/New Heaven/Heavensburgh/New Haven and ended on Havensburgh.  I like it, and sounds like it could be a real town anywhere.

Anyway, I took a few teaser pics of my city set up.   You'll get a good view of a couple of my virtually complete Sarissa buildings.  Also, a few vehicles I have thrown together.  I am not in love with the WWG vehicles, or rather, my abiltiy to put them together nicely.  They never quite look that good close up, but at a distance, they will do.  The price is certainly right, as I want a fair amount of vehicles available on my streets. 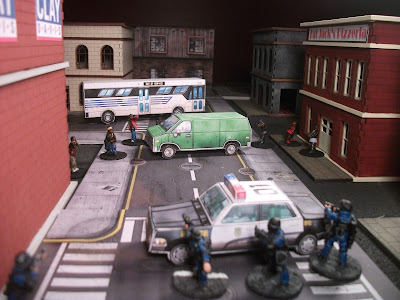 This is in the days prior to the zombie breakout, and the SWAT team are dealing with some gang members in the street.  Both sides of the shoot out have taken cover behind vehicles in front of the Pizzeria. 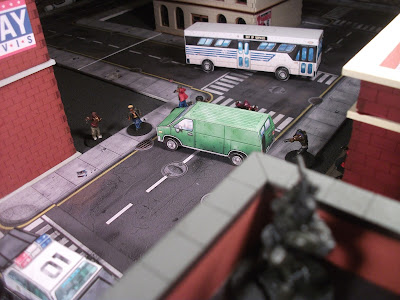 The Special Forces sniper takes aim at the husky ganger leader, hidden behind the van.
Hope you enjoyed this quick update, comments are appreciated.
Posted by Adam at 19:39 21 comments

Just going to pop in with a quick update today.  Here are 5 of my remaining 15 Victory Force zombies.   Not much of note at this point, a little fun variety by adding YES/NO to two of the shirts on a duplicate sculpt.  I like to think they were at opposite sides of some sort of community matter.  Nothing big like voting for the legalities of gay marriage, but something more along the lines of naming the 3rd Friday of every month Mayhem Cities Vegan Day.  Either way, they aren't protesting anymore. 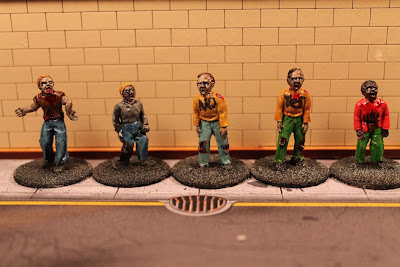 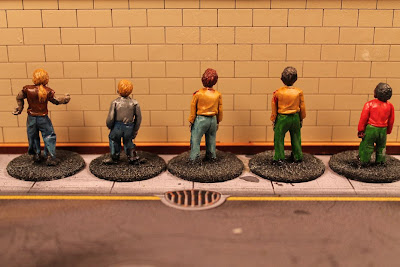 Not much else to note at this point, as everyone knows the drill on VF zeds at this point.  A little home note however, I found out today that I am laid off my job in 8 weeks.  Hopefully I will find new employment between now and then...but if not, it will mean two things that unfortunately butt heads.  First, I'll have more time during the day to paint and hobby.  Secondly, I'll have far less funds (ie none) for new models and terrain.  Hopefully I'll have enough at that point (an order of Studio Miniatures on its way should round me up for a while, though I did want to buy some more Foundry Paint Trios).  Anyway, we'll see what the future holds.
Until next time.

And Then a Hero Comes Along...

Another update on the ATZ game preparations.   Things are coming together nicely.  I am just about done with my Victory Force Zombies.  That has been at quite a standstill lately, but I started working on their bases.  I may have to touch a few things up on them, but they should be making their appearance on the blog soon enough.
As well, I have brought 5 of my 6 Sarissa buildings to near completion.  I do want to attach a bit more signage in a few places, but they are just about ready to be featured here as well.  They all need some furniture still, but I have printed off several sheets from WWG for this purpose.  I'll probably feature the buildings without furniture in the next week or so.
Also, I have a good chunk of roads from WWG printed out and pasted onto cardstock, and have even set up a little city.  I shouldn't be too far off of some gaming.
While all the above mentioned items are close to being ready, none were quite enough ready for its own blog post, so today I'm going to show a figure I actually finished quite a while ago, but didn't get a chance to update.   The figure is going to be my ATZ representation of myself. 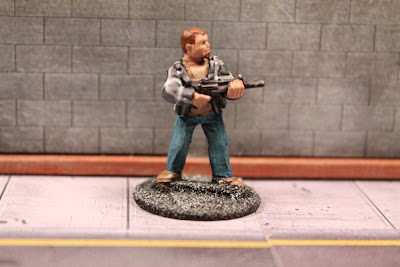 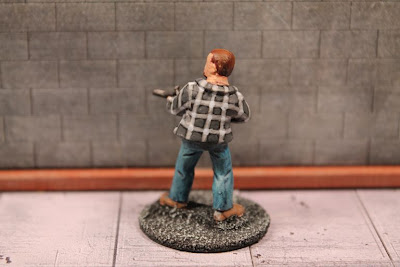 Anyone who has read Vampifan's battle reports know how cool it is to have a miniature representing yourself on the table, and I knew I just had to do the same.  It was tough to settle on something that captured me at least semi accurately.  I knew I needed a few things: short hair, a goatee, a gun in a firing position and clothes that could be made into something I would wear.   I never found such a figure.
But I ready to tackle my first conversion by combining the best of two figures from Wargames Foundry Line;  Blanco from The Proffessionals and Ace from Juno's crew. 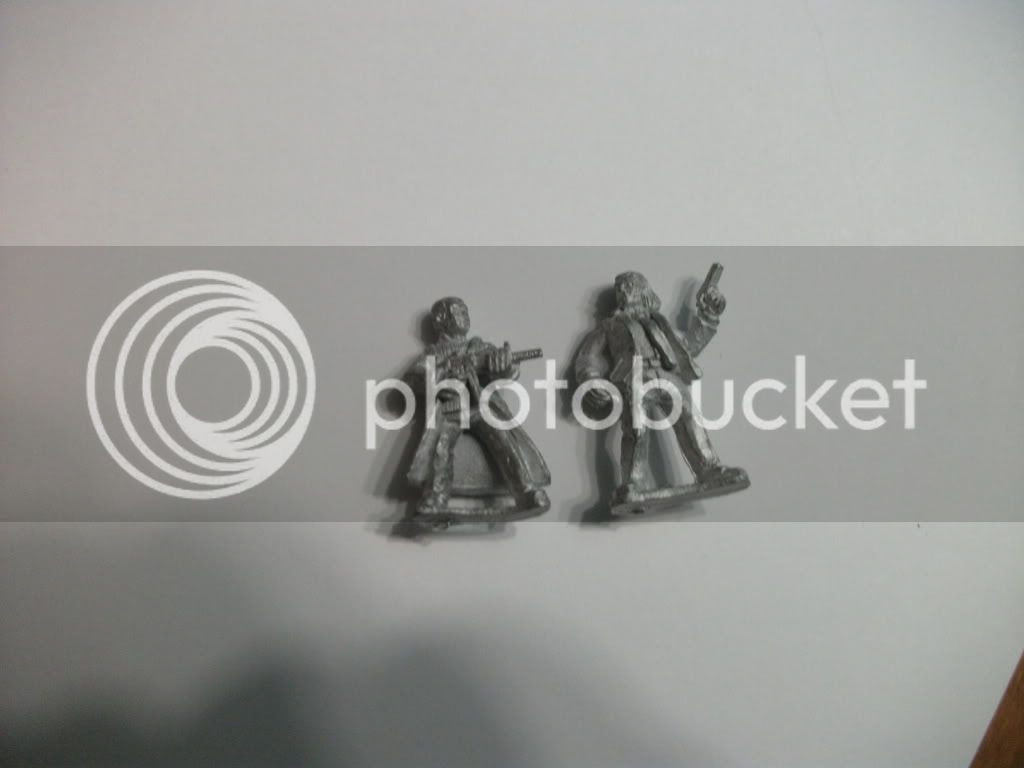 I really liked the pose of Blanco, but he's trenchcoat is not something I could ever say I wore.  Also, he is a bit shorter than most other figures (some of that is due to his pose).   He also did not have a goatee.
The goatee was the easiest issue.  I attached the tiniest bit of greenstuff to his chin, and textured it slightly with a tooth pick.  To deal with the sweater look (I rarely wear sweaters), I just sanded away the textured lines from his shirt.  Now it looks like a T-Shirt.  Then came the tough part, cutting both miniatures in half, and switching torsos.  It actually wasn't that bad!  On the Lead Adventure forums I received some great advice/motivation from Ramshackle_Curtis, who is the sculptor for Ramshackle games (check them out).  Using a jewelers saw, the process wasn't that bad.  Suddenly the miniature was taller, and wearing a coat like I normally wear.  The plaid paintjob was a must. 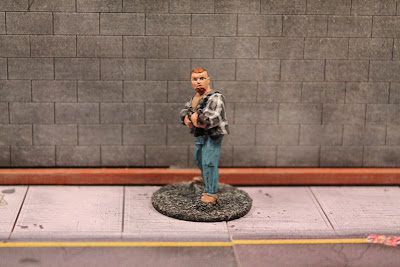 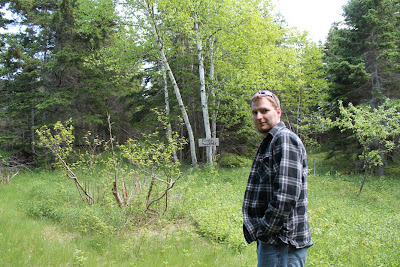 Again, I'm pretty happy with how it came out, even the paintjob seems to have just worked.   I showed it to my four year old and he had no problem knowing it was supposed to be me.  I also attached a pic of myself just to show the resemblance.
Now it's time to see how he survives in the Zombie Apocalypse.
Comments are always appreciated.
Posted by Adam at 05:36 10 comments

Since I did not have any final products to display and I wanted to keep at least semi regular on updates, I decided to post a few pictures of the room in my house which is dedicated to my hobby and gaming.  I feel somewhat lucky to have enough space for all of this, given that I've seen others who have little more than a single desk to hobby upon.  Though my wife has attempted on a few occassions to move in with some crafting of her own, it has seemed to stay within the Christmas season for her. 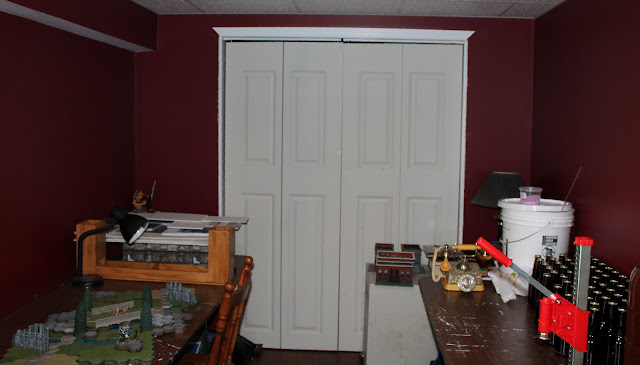 Here is a picture of the room from the entrance.  Starting in the bottom left is a set up of the game Heroscape, which was my intoduction to miniature gaming.  I don't play it as much now, but I like to have a map set up just in case.   Moving up from there, is a pretty kick ass dice tower that a friend of mine put together.  Semi hidden behind the dice tower, is a Mayhem Industrial building that I began working on before even starting this blog, yikes.  Stacked ontop of that are many (many!) pieces of Mayhem Streets that I printed off and attached to cardstock over the past week.  Many roads are needed for my ATZ campaign.   Movings to the right from there are my Sarissa Precision buildings ranging in completion from 0 - 90%.   Continuing on there is a big bucket, that is used for homebrewing beer.  Speaking of which, you will also see 64 bottle beers (Blonde Lagers) that are almost ready to drink. 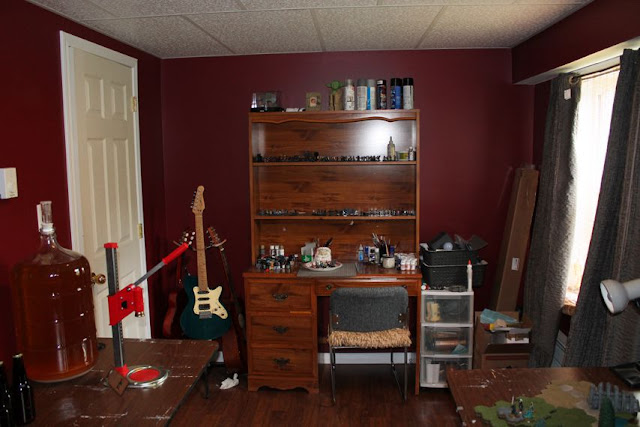 Starting in the bottom left again, we see; more beer!  This time a carboy full of a Mexican style cerveza.   A benefit of the homebrewing in the games room is that it always has a scent of beer.  Passing the stack of unused guitars brings us to my painting station.   GW paints on the left, current painjob in the middle and brand new Foundry paints on the right.  The shelves are stacked with completed miniatures, and various other hobby items.

So that is where I hobby and game.  Its not the best situation, but it is pretty darn good.  The room needs a bit more nerdy decorating, but I am hesitant to put funds into that rather than gaming needs.
Also worth noting was that all my items are stacked on two long tables.   When the time comes for ATZ campaiging, I can move these tables side by side for a game area of 5 feet by 12 feet.  This should cover my needs nicely and allow me to create  large cities.  Its also a good size for gaming of other sorts too.

Well, hope you enjoyed a glimpse into where my work gets done, as I had enjoyed seeing to locations many of you work in.
Until next time, when I should have a real update.
Posted by Adam at 04:22 17 comments

Today's post won't be an update on the gaming or hobby world, but a post about the son of a friend of mine,  Austin.  Austin's father and I went to highschool together, and really have not been that close since.  We are still friendly when we cross paths at weddings or parties, but we don't keep in much contact.  Over the Christmas holidays I met up with him again at a party, where I was also lucky enough to meet his 4 year old son.   It wasn't until after he left I learned that Austin had been diagnosed with Muscular Dystrophy
Bryan and his family are doing some fund raising  for a walk this month.  I don't have a lot of extra income.  Even when purchasing for my hobby, it is rarely a case of spending money on a whim, but more a matter of setting aside $10 or $20 at a time, until I have enough to make a purchase.  I was close to a making an order from Studio Miniatures this month, but decided to put that money towards this fundraising instead.  I don't donate to charity a lot, and since this charity will benefit someone I know personally, I felt good about doing it.
I know that none of my readers will have any connection to this story, but I thought I would share it nonetheless.  Maybe some of you would be able to contribute as well, as even donations of $5 would help, if enough people made them.

Anyways, I don't want to force this on anyone, so I will leave it at this point with a little video link about Austin and a link where you can donate.

Regular updates will come this week, thanks.