Just another quick update on my ATZ preparations.  The excuses I had for slow  painting in my last blog update (no Dhenub Stone or washers upon which to base the miniatures) have both been rectified. I have six new Zeds to add to the horde.  The pictures are a little darker than usual, but I was a little rushed, so I did not go back and retake. 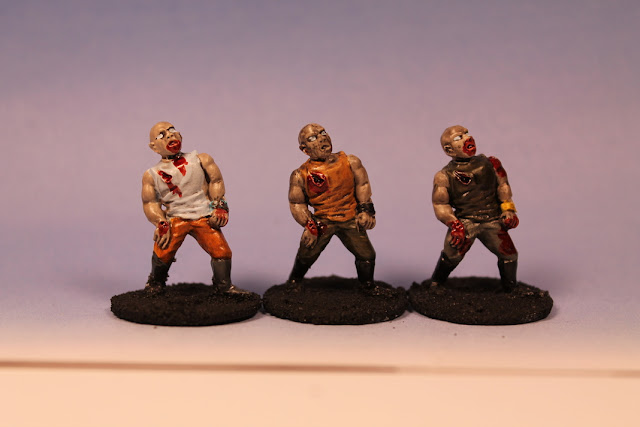 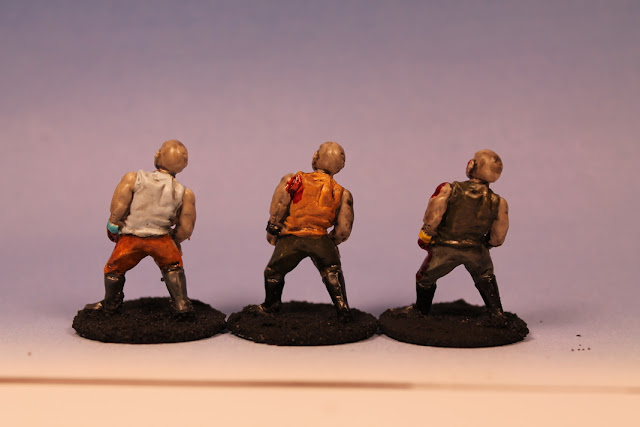 The first trio is made up of the same sculpts, which is a risk you run when buying VF's zombie deal.   I didn't mind so much as it is a pretty good sculpt, and its not like I would use them side by side in a game.  Spread out on the board, one would not likely notice.  In hindsight however, I probably should have taken the time to paint at least one with African flesh.  Anyway, these are big, tough looking zombies with more than a few visible wounds.  They are still quite intact however, and look among the more fearsome zeds in the VF group. 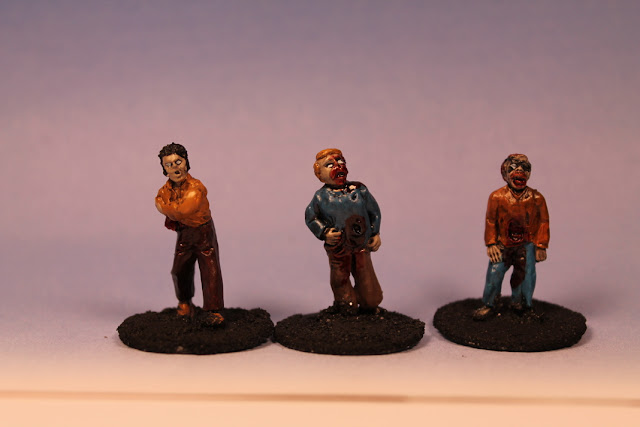 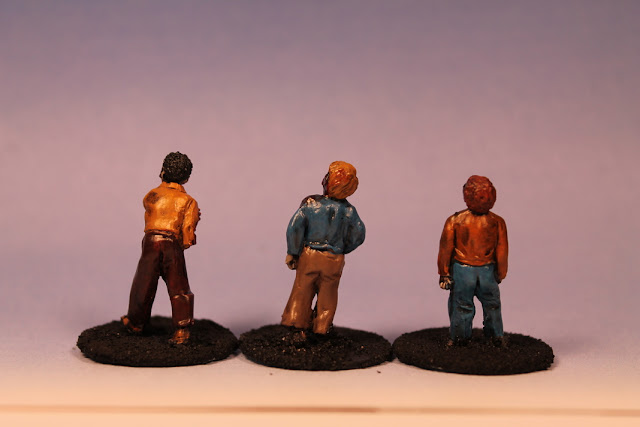 A bit more variety in this trio.  They are a bit sloppier, and I blame some of that on the lousy spray paint I used for primer.  It had a satin finish (I think) and paint did not adhere well to the mini at all.  I really had to lay it on thick, which went a little less cleanly than I would have liked.  But in the end, they are zombies, and I feel ok with a little dirtier paintjob, especially when I can just bloody up the worst areas.

Well that is 6 more down, and I will admit that my lead pile is getting quite small.  I have a few more updates of VF zombies, but then I will be all out.  I have placed an order for Sarissa buildings, so that will be my next  project.  And since I have some WorldWorks roads to print, I may not be too far off of getting a game in, which would be a nice change.   Hopefully some battle reports would be of interest.

Anyway, until next time. Enjoy your weekend
Comments are always appreciated.

Here we are with another update.  Before we get to this week's walkers, I'll give a few updates one where I am at with working on my All Things Zombie project.  First off, despite the name of the the majority of the posts on this blog, I doubt I will be making an actual "Mayhem City".  Instead of using World Works games cardstock terrain, I will probably bite the bullet and pick up the Sarissa Precision City buildings.     They do have a bit more of an initial cost vs World Works terrain, but once you factor in cardstock and many ink cartridges, I don't think it will be that big of a deal.  Plus the amount of time it will save me may allow me to actual get a game in this year.   I will probably use some cardstock terrain as well, especially some of WWGs interior terrain, since I already own multiple sets.

Also, my updates have been rather slow lately and I will put the blame on two major factors.  One, is that for 3 weeks, I have been unable to locate the washers I use as bases.  When I finally asked, the Hardware Store said that the washers are stocked independently by the washer/nut/bolt company.  So I am still waiting on those.  I do however have some miniatures already attached to miniatures, but still I am unable to complete them.  This time, it is due to Games Workshop switching their paint system.  I ran out of Dheneb Stone foundation.  I thought I would just order more online, but due to GW switching the paint line up, they only accept preorders online.  I dropped into the local GW and they were out of the old Dheneb Stone and wouldn't be restocking until this Saturday (tomorrow) with the new paints.  So hopefully I can grab some more tomorrow.
Blah, enough with the excuses, let's look at this week's Zeds. 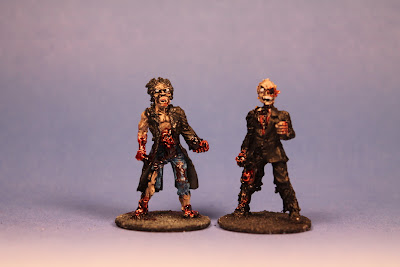 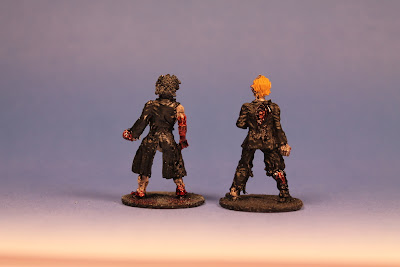 These are two of Reaper's Urban Zombies.  I will be honest and admit they were not the Zombies I was expecting when I ordered.  Due to an error in ordering, they were what I received when I meant to order a more modern set of Reaper Zombies, including a police officer.  Instead I got a pack of three, armed with weapons and looking from a different era.  I clipped the weapons, and only decided to use two of the three. The third was just two out of place, and will probably get mangled into a corpse marker at some point. 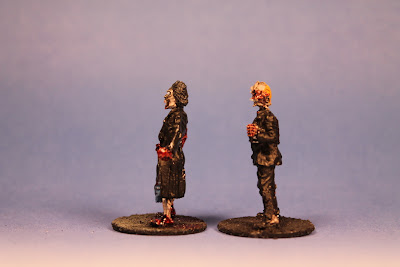 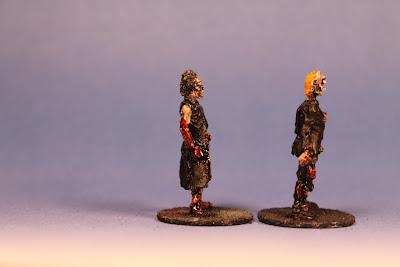 The two zombies I did work with are full of character.  First off, they are both very large.  If the average miniature I have is approximately 6 feet tall, then these two brutes are much closer to 6'10".  I'm okay with that.  Despite liking most of my figure to be in scale, I to like the variation of a few shorter and a few larger to not make things like too uniform.  The thing that can ruin scale creep for me is when equipment like guns seems overly large or small, but that isn't an issue here.
So the Zed on the left looks like he may have been homeless before meeting his end.  He wears an over sized trench coat and dirty, torn jeans.  He also lacks shoes, which result in him leaving a trail of blood when he steps.  I really liked that about this guy.
Zombie on the right however was a young, up and comer in society.   I like to picture him as a sleazy politician or something.  Regardless of where he was going, he didn't end up any better than the homeless fellow.  He looks good in his blood stained suit however. 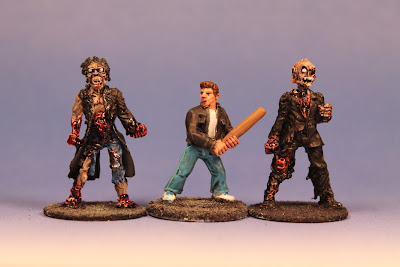 So as mentioned, these zombies are huge.  I would like to use them in some special circumstances when alot is on the line, like a boss battle.  It would also work very well for a single survivor without firearms had to deal with one of these guys.   The pic above really shows how intense that could feel with the size difference.   These zombies are a great addition to the collection.
Comments are appreciated.
Posted by Adam at 12:18 20 comments