Hey again, welcome to the infection of Mayhem City once again.  Now when the infection first begins, many people will be caught in their line of work.  We see this in many lines of miniatures featuring firefighters, police officers or doctors.  Well in the seedier blocks of the city, Mayhem's hardest working single moms are performing their duties, and not even a zombie apocalypse will stop them.  I give you, Zombie Strippers. 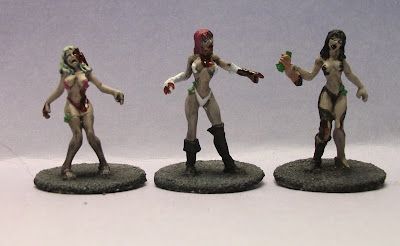 Starting on the far left is Blondie.  She has clearly taken quite a wound to the head that has covered her eye and stained her platinum blond hair.    She also has a wound down her side but the blond staining her hand is not likely her own.   Her mouth looks like a particularly anguished zombie.  She must be hungry, as there is no evidence to suggest she has fed lately.
Pinky in the middle is my favour of the the three.  From the front, she is drenched in blood, but none of it is from wounds of her own.  She has obviously feast well, with the amount of blood covering her mouth and neck area.  Her hands have also recently torn someone inside out.
One the end we have the dark haired girl.  Donning black colours in general, she still clutches the severed arm of a former patron.  She is showing multiple wounds from the legs, and a mouthful of blood (though not her own, I assume). 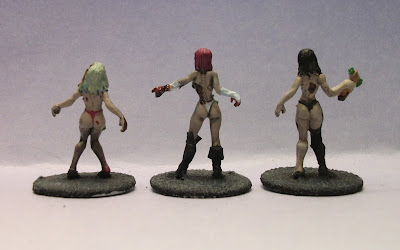 And the girls from the back.   Each of them shows some sort of wound.  Blondie just has a few areas of seeping flesh, while Pink had a large wound that was likely the result of her zombification.   The dark haired girl did not actually have a sculpted wound on the back, but I noticed I had accidentally left a black mark their during painting, so a little blood fixed that up nicely.  This is my favourite thing about painting zombies. 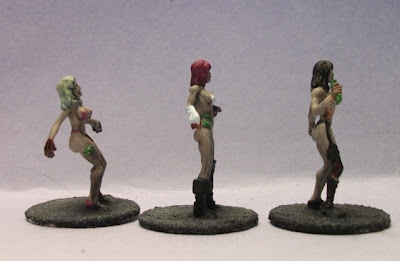 A profile shot, showing that even as zombies these girls are all about the dollar bills.   These Reaper Zombies are quite tall compared to most models.  It doesn't bother me, but it is worth noticing if you do not want your zombies to outsize your heroes.   I believe Reaper miniatures in general tend to be larger, but for now these are the only ones I have. 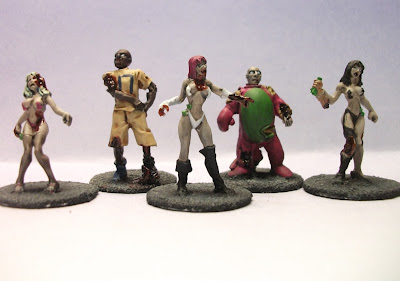 And with the addition of the Zombie Strippers, my horde more than doubles in size.  It's not too impressive yet, but I'll keep updating this picture.  The zombies I have so far have been full of character, but I'm going to have to fatten this horde up with some filler zombies I received from Victory Forces during their last big sale.   Right not it might not be much of a challenge for a group of survivors, but give it time.  The infection spreads.

Thanks for reading, and as always, comments are greatly appreciated.