More great Studio Miniatures Zombies to look at in today's update.  These zeds come from Zombie Mob 8, and they're pretty fantastic. 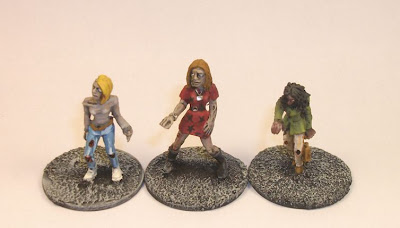 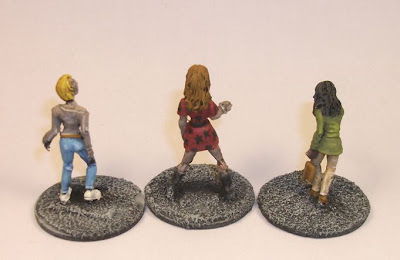 Starting on the left we have a young blond zombie.  Her legs are covered in wounds, perhaps from before her infection  but other than that she is rather clean.  Next up is a lady in a party dress.  Originally, I was just going for a random pattern on her dress, but the first mark came out like a star, so I went with it.  Again, a few wounds on her legs, and a scratch on her arm, but not overly bloodied.  Third up is a black zombie, a business casual presence complete with purse still in her undead grasp.  Perhaps my favourite pose of the 3 females, her out stretched arm seems very zombie like.

On with the male zombies, we strat with a middle aged black zed.  He has a bit of an of balance swagger pose.  Quite a bit of blood stained on his shirt, and his mouth is a mess from a recent feeding.  Great sculpt.  Next up is a bit of an oddly styled zombie.  Bearded with long rockstar hair, he is dressed in a sports coat with blue jeans.  More interesting is the vicious belly wound complete with intestines exposed!  Gross.  Definitely not a zombie you want to see on your first day of the apocalypse, you need to build up to zombies this gross.  Next up we have what I can assume was a homeless man before his infection.  Dressed in a torn coat and jeans, he is using a rope for a belt.  His arm is exposed to the bone indicating that he was likely fed upon a bit before his conversion.   Fourth in line is a business man in a pale brown suit.  I like the way his colours came out.  He is mostly unbloodied, would make a good Day 1 zombie.  And the final zed has been featured in this blog before as part of Zomtober.  While I stated then I was not a huge fan of his pose, I AM fond of his exposed brain.  Very nice.

As expected, these are all top notch zombies from a well respected company.  I'm happy with how they all came out, though perhaps they aren't bloodied enough.  I think I just don't like covering their great detail with gore!