Hello, hello, here is just a quick update on my Zomtober painting project.  Nothing special, just one of Studio Miniatures  fantastic zombies. 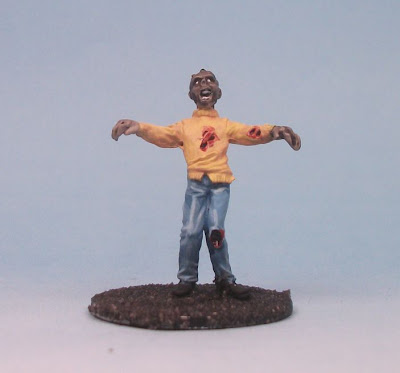 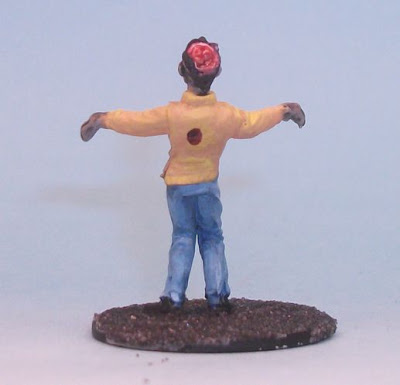 There's not a lot to say about a single miniature like this.  I will add that when I order his set, he was probably my least favourite pose from the set.   This is because I can't look at his pose and not think of a marionette.  After receiving him however, I grew much fonder of him due to his exposed brain!   He'd probably be a relatively easy zombie to finish off if destroying the brain is really key.  Someone was very close.
Other than the obvious head wound, this zed has several cuts over his body.  They look like stab wounds from the front.  Perhaps some poor fool thought they were dealing with a dangerous drunk that could be felled by a mere knife wound.   Or maybe the wounds came from someone similar to the last episode of Walking Dead, where stabbing was attempted.  Either way, those wounds have character.  Not much else to say, I like hose the paintjob came out.  Still a fan of the Foundry paints.