Well for the first time in a long time I've managed to keep with a weekly posting.  It's nothing worth bragging about so let's jump right into this weeks content: Tiny Terrors from Studio Miniatures.  Zombie kids are still a little taboo.  Despite being a large part of the population, zombie children are rarely featured in zombie media.  Even The Walking Dead, has only featured 2 zombie kids that I can think of, and both were rather emotional to deal with.  And in keeping with that, Studio Miniatures has the only zombie kids on the market that I can think of, and they are some great ones.   Let's take a look.

Also worth noting with this set, I gave my first real whirl at painting with Foundry's Paint System triads.  I don't have a ton of colours yet, as what I bought was just trying the system out, but I liked the results.  I am bad at picking highlight colours, so with the Foundry System, this is made much easier, even if you do sometimes still need to mix some paints, you are at least guided in the right direction.
First up we have a little red haired boy dressed in yellow and brown.   He has some minor wounds to his belly and shoulder area, but nothing too major.  Next up is another little guy, who's highlighting I think came out really well.  Again, just minor wounds to the boy, but unlike the first, this one has been feeding. Next up we have a little girl with an eye wound, but not much else.  She stands very stiff, and I can picture some survivors coming around a corner to see her and being very creeped out!  The next girl in yellow is a bloody mess.  She definitely took some wounds in death, but has also been feeding quite well herself.  Sadly, she still clutches her doll from before her zombie days.   The next girl is in a pretty little dress, but also a bloody mess.  I like to think that she was shot in the chest, but too late to prevent her from being infected.   And the final boy has a few wounds of his own, including blood seeping into his eyes.  Doesn't slow him down (anymore than death has, anyway).

This is a pretty great set, and perfect for mixing up your zombie horde.  Just a few children peppered in a crowd of zombies will add a lot of diversity to the group, I think.  I'm going to attach a few closer up shots to the end of the blog.  As always comments are appreciated, and I hope to be back a week from today with another update. 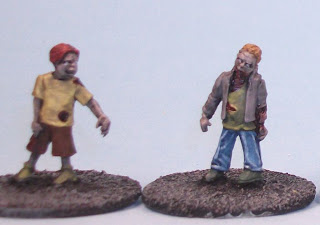 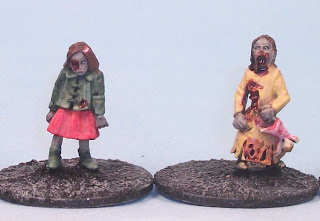 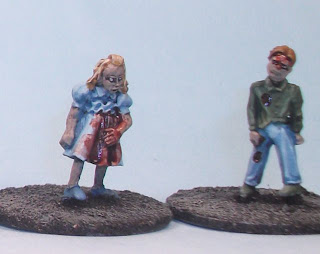