It seems like forever ago, but a while back I made mention of being in the market for police miniatures for my ATZ campaign.  At the time I was trying to decide between Foundry, Copplestone of Tactical Miniatures police sets.  In the end, I went with Tactical Miniatures set, mostly due to the variety of weapons.  If I had gone with any other  set, I would have had to buy multiples to get both Shotgun and Pistol armed officers.  As I am trying to do this as economically sensible as possible, the Tactical Miniatures made the most sense.
As for paint schemes, I considered a typical 'police' blue, but changed my mind at the last moment and decided to go with the modern Royal Canadian Mounted Police look, just to have a home grown feel to them. 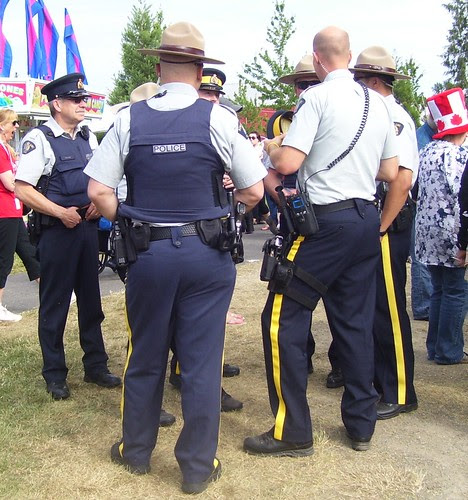 Obviously the Tactical Miniatures police do not have hats, not vests, but the rest of the uniform looked pretty good.  My greys wound up a little darker, but I wanted to make certain they didn't come across as white.  I still may try to lighten them a bit (but probably not, they are good enough for me).  First up, the two police officers with hand guns. 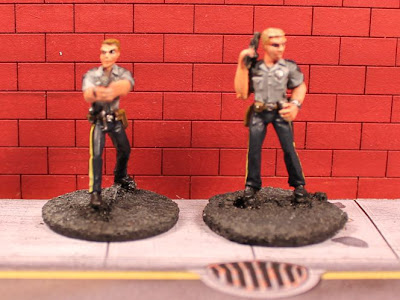 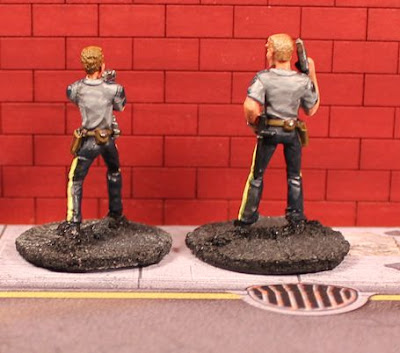 And then the duo with shot guns, including the only female of the set.  Each of these duos has one figure posed lining up a shot while the other is more 'at the read' looking around.  I like this diversity. 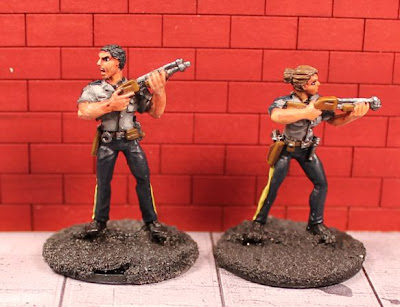 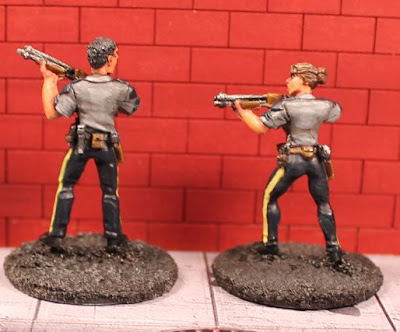 And finally, the assault rifle officer.  I'm not sure how often RCMP units need assault rifles, so this guy will likely get the least amount of use from the set.   If anything, I may use him as an eventual survivor after the period in which police have dissolved. 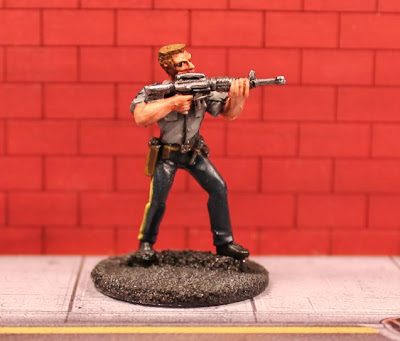 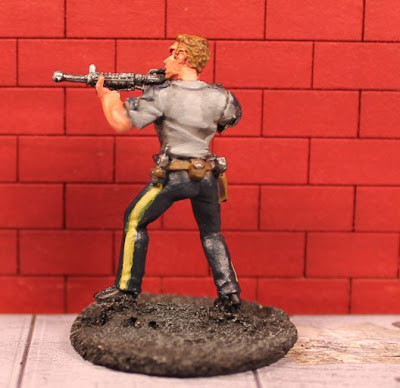 Overall, I am quite a big fan of this set, and will probably eventually get the Narcotics Division of the same line (though they are mostly armed with Submachine guns, they all have body armour, which is nice).  The scale on these models make them slightly slender when compared to most of my other models, but most of those are Foundry which are on the bulkier side in general.  I don't think it is a big deal.  Highly recommend this set.

(I did realize upon looking at the pictures that I need to add a bit of yellow to the dark blue shields on each shoulder of each officer.  But that won't change much of the overall appearance, so I went ahead with the post.)