Just a single figure this week, but its a good one, Tony (b) from Hasslefree.  Hasslefree miniatures are known for being a cut above the competition, so its fair that I'll review them on their own I think.  Also this figure is almost certain to be featured in my eventual campaign as he is a close representation of one of my closest friends.   He's the type of friend that I wouldn't be all that surprised to find out that he had all this gear on hand "just in case". 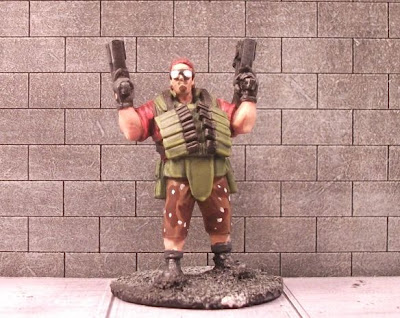 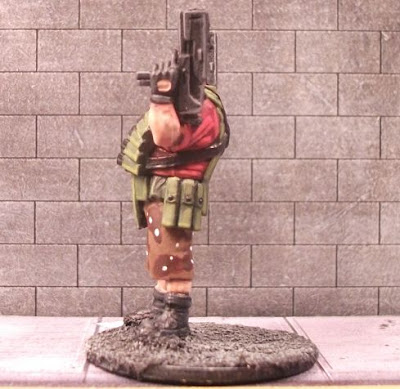 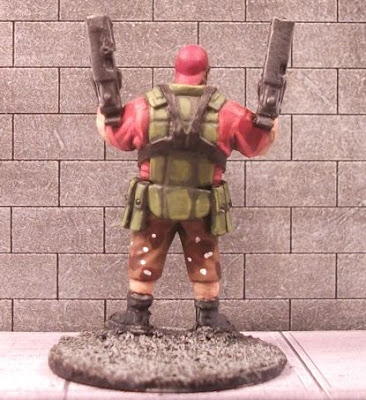 So Tony (b) is armed with a couple of Mac-10s.  Incidentally this is my least favourite Hasslefree weapon.   They look a little too SciFi for me, and are quite oversized for a sub machinegun.  Oh well, they are also passable as large calibre pistols I guess.  He is also decked out in body armour and many extra clips of ammo.   I'm pretty happy with the paintjob over all, except for the camo on the pants.  I copied a simple camo technique from the Foundry Painting Guide, and while it was simple and looks passable, I'm not completely sold on the white dots.  I won't be changing it now, but I doubt I'll use it again. 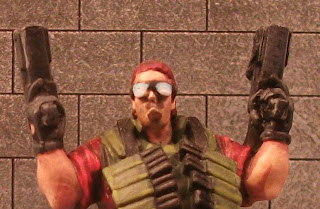 I just wanted to show a close up of the glasses, as they do transition from white to blue, though it was tough to get this to show in pics.  Now that I have a pic this close, I wish I had thinned the paints out more!