A bit of good news for this update, I've done some rearranging of lights and produced (in my opinion) pictures that are far better than what I had been using lately.   Since that is the case, I will include a few extra pictures of previous updates at the end, just so there are better pictures of older figures.  Now onto this week. 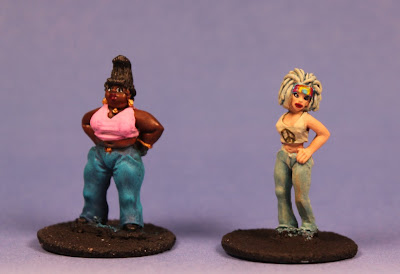 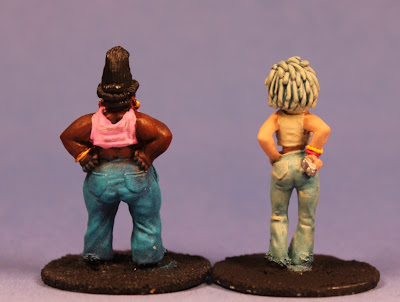 Boomsheeka on the left is actually only about 95% finished, as I still need to add some sort of highlights to here hair, which is just a solid black at this point.  Booksheeka is a big girl, to say the least, but comes unarmed.  I considered adding a weapon slung over her shoulder, but realized that she wasn't likely to become a regular part of any zombie fighting force or ganger, and that I could always use more unarmed civilians, so I left her as such.   She looks tough enough to handle herself without weapons anyway.
Next to Boomsheeka is Blix Moonbeam, local hippy chick.  She may preach the ways of loving your fellow man, and just enjoying some good weed, but that didn't stop her from picking up a gun when the Zombie apocalypse hit.  Fortunately, her gun is so small and tucker behind her back that I could get away with using her as another unarmed civilian if needed.
I'm a pretty big fan of both these figures and how they came out, but I think Blix is just a little bit better.  I also put a little bit more effort into her paint job with the tie dye bandanna and peace logo on her shirt.  I wasn't too happy with how her lips came out (a bit clownish) so I may try to fix that at some point. 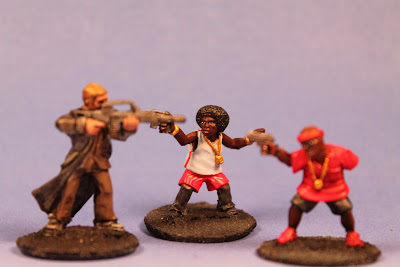 Here's another look at the last two week's worth of updates.   The Professional faces off with Aldo and Baldo.   Of course, my camera skills aren't great so I have a bit of the 'focused on one figure and blurring the others' effect going on.  I should have put them in a straight line.  Regardless, this shows them better than the pictures I used last week. 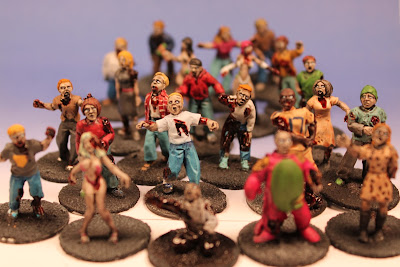 And finally, an updated picture of the zombie horde.  It is not overwhelmingly large yet, but it is getting to the point that would be too much for a small group to survive.  And perhaps, almost enough to game with.   A bit of the same focus issues here, but I think it looks okay for a horde shot.

All comments and criticisms are appreciated.