This week I'll be showing off my most recent trio of figures, and they'll be from a bit of a different line of figures.   The Assault Group make a lot of miniatures covering modern and historical warfare, but not many of them have been used in the Zombie Apocalypse setting, so far as I have seen.  I liked the look of a few sets in the Organize Crime line, so I grabbed a set.   They are a little smaller in scale compared to most of my other figures, but not so much that it becomes an issue on the board.  I bought a set of four, but for some reason only primed 3 at once, and so only 3 got painted.  I'm unsure of whether or not the fourth will wind up in the same scheme or not. 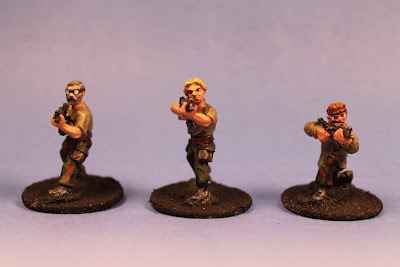 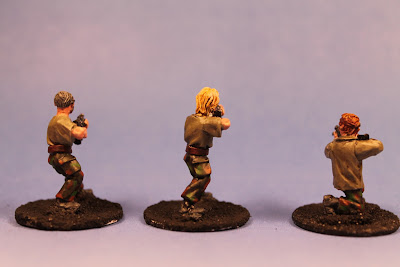 These three got painted up in somewhat of a military styling, with camouflage pants, but I picture them as being more of an eccentric militia than official military.   These guys might make great saviours or wind up being just as much a threat as the walking dead.  All three are armed with the sub machinegun version of the AK74.  I really wanted figures armed with AK47s, but there are just not simple to find.  (The Assuault Group does have several, but none with the look I was hoping for.) 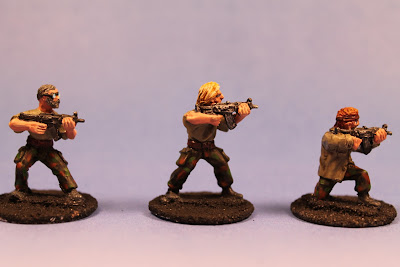 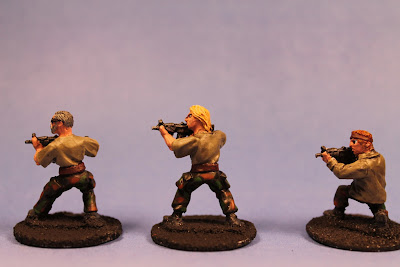 Each of these three has a nice amount of character, but I have not named any of them (yet).   On the far left is an older militia member.  His grey beard indicates that he's been around a while, and I like to think that he's been in a milita for most of his adult years.   He's been prepared for the communist invasion for as long as he can remember, and probably feels he is well suited to be a leader as the zombie uprising begins.
Next up with the blond flowing locks is the figure I've been calling Fabio so far.  The name may not stick.  At a first glance this guy looks like he may be too pretty to be in a milita, but the way he holds his machine gun makes up the first glance opinions.
Last in the line is the headbanded fellow, wearing a long sleeve shirt.  He is in a pretty nice crouched position in order to better target the zombies.     I was a pretty big fan of all three of these sculpts, especially with how aggressively each is posed.  I tend to enjoy figures who are aiming their weapons moreso than those who are just carrying them, and so of course I like this set.  In fact, the reason I picked them up was because I was considering doing a headswap on the Fabio character and using him as my main character for ATZ.    When the time came however, I liked the figure too much to do so.

Hope you enjoyed the trio, all comments are appreciated.