Welcome back to those that are still reading, a couple of more thugs have shown up on the street of Mayhem City.  Whether it is to create problems for the police or do their best to survive the Zombie Apocalypse, this duo is prepared to bring the fight to the table.

Today I present the brothers Aldo Prince and Jack "Baldo" Prince, affectionately known as Aldo and Baldo.  Also sports a nice afro, and a machine pistol.  His hand post indicates he may be smoking, though my figure has no cigarette in his hand.   Also is the younger and sportier of the brothers, as he is rocking a basketball jersey and short (for some reason, on top of long pants).  Of course, to dress to impress, he has his share of bling shown off. 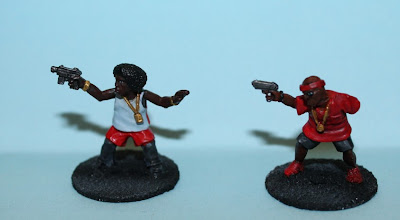 Baldo is a bit of a custom figure, as his head is taken from a different Bobby Jackson figure.  What can I say, I liked the original head from this figure better somewhere else.  That will come in a future update.  Baldo also favours the colour red, like his brother.  A little more mature however, hs is satisfied with a regular old pistol to do his talking.  More bling of course, one is never too mature for bling. 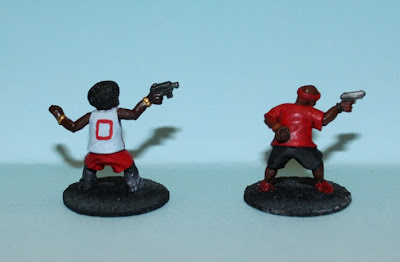 The pictures aren't the best.  My wife got a new camera for Christmas, that once I figure out, should produce much better pictures.  However, my biggest problem is lighting.  I need to pick up some better lamps for photos. 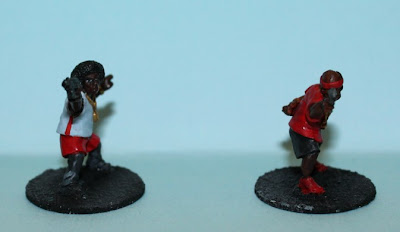 As with all Bobby Jackson's thugs I liked these figures a lot, despite modifying one a little bit.  These guys look a little overwhelmingly red as a duo, but they blend in nicely with the rest of the gang.   The full names don't really stick with me, as they are simply called Aldo and Baldo.  That started as Afro and Baldo, but I preferred the rhyming scheme.
As always, comments and advice on the figures is appreciated.

Also wanted to take a moment to point out a new blog/store I stumbled across last night.  Demo's laser cut terrain is looking like a nice cheap way to quickly put together some buildings.  As much as I love worldworkgames' cardstock terrain, the time investment there may keep me from ever getting ATZ on the table.  I will be picking some of Demo's designs up when I get a chance.  Check them out here.
Posted by Adam at 09:24