I know the updates have slowed down a little bit, and it isn't due to any particular business in my like (other than Skyrim) but more so due to that fact that I didn't have anything painted.    I've slowed down in that front, but did manage to get a few more zombies for the horde painted.  There's not a ton to note about them, but they do expand the horde. 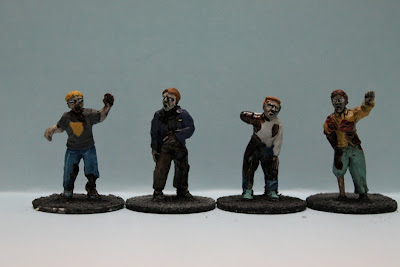 Starting to notice some similar heads on the Victory Force zombies in the pack of 50 that I got.  Not a big deal to me, as different hair colour is enough to make them look different.   The first two in this crew are pretty standard zombies.   The first fella only has a wound on his leg, but I painted up some gore around his mouth and on his hand, so he's been feeding.    The second has not been feeding, and has a significant wound on his stomach area (sorry it is so dark). 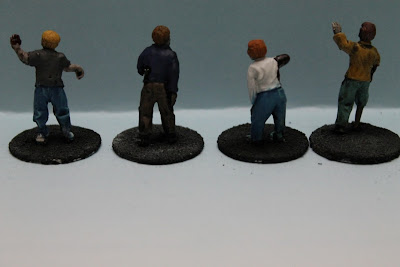 The following two zombies have a bit more character, as one is missing an arm, and the other has a peg leg, quite unique in the zombie world I think.   I like to use light or white shirts on zombies when I can get away with it, as they look great when covered with blood.  So of course the zombie that lost an arm is a perfect candidate for this.   Peg leg is covered in gore as well, and I really like his face.  It is thin and sickly, but looks a little mean and evil as well, kinda like Ray Liotta. 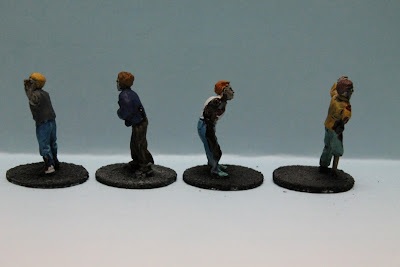 Hope you like the expansion to the horde.  All comments are always appreciated.
Posted by Adam at 18:37