Alright just keeping in the theme of naming my blogs as something to do with Mayhem city.  The following miniatures are actually quite unlikely to be used in any city themed gaming.  But they are among my first ever painted miniatures, and since I haven't had time to do any real painting this week (damn flu) I thought I'd show some old ones.  Here they are, my Space Hulk (3rd Edition) Tyranids. 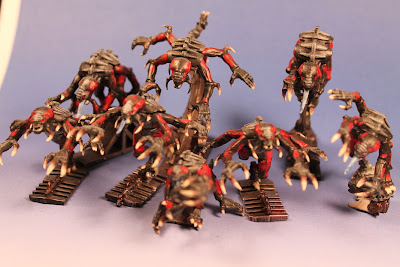 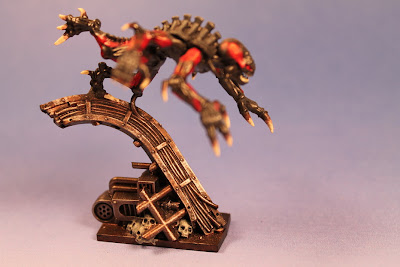 I don't think they are fantastically painted, but they're not bad considering I had pretty much just jumped into the hobby with both feet.  In retrospect, I wish I had practised on a few models first, but its too late for that now.   I'm particularly proud of the finger nails.  I followed an online tutorial to achieve such an effect.  The official Space Hulk tyranids were of a blue and purple scheme that I was never fond of, so I went with something a little darker (and probably easier, in the long run).   I still like them better than the official colours.   Space Hulk is the only GW product I've ever played or purchases, so I wasn't too versed in the history of the tyranids anyway.

I won't likely be around to comment or read everyone's blog this week (starting Sunday) as I'll be vacationing in NYC.  I'll try to catch up next week. Hope you enjoyed the Tyranids and when I get back, maybe I'll post the Space Marines.
Comments are always appreciated.