So far we've covered a wide array of Mayhem's citizens, from the military and police force, to the thugs on the street.  But so far they all had one thing in common, they were all armed.  Whether it was pistols, assault rifles or just baseball bats, they had all something to wage battle.  Not so, in today's figures. 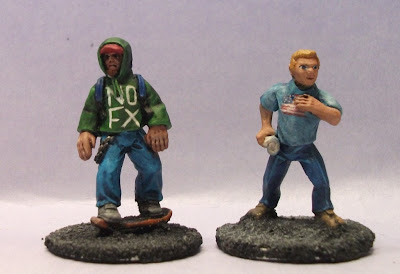 Two more "Street Thugs" from the war games Foundry.  Their names from that company are Tony and Bets, respectively.   Tony, I've painted with a sweater sporting the name of California punk rock band NOFX.  They're a favourite of mine, and something I could see an adult skate boarder wearing.  Bets, I painted up with an American Flag on his T-shirt with *USA* written on the back. 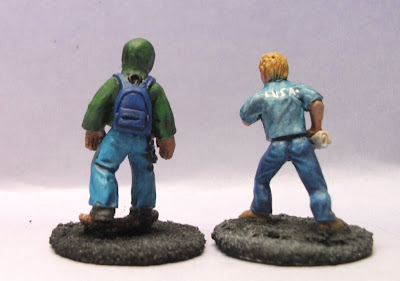 While these guys are listed as thugs, I'll probably get just as much use out of them as regular unarmed civilians.  In actuality, Tony can be listed as having improvised weapons in the form of his wallet chain (1 handed) or his skateboard (2 handed).   And if need be, I could assign him any weapon that would fit in his backpack.  Bets could also have a concealed weapon in that rolled up newspaper I suppose, heh. 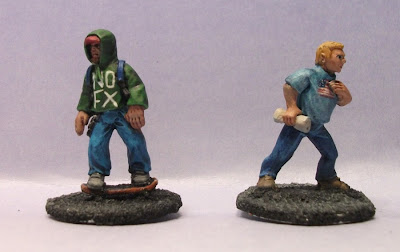 As for the sculpts, once again Foundry does not disappoint.   Both are great dynamic poses, with Tony cruising on his board, and I particularly like how Bets looks like he is storming towards something with a purpose.  They would make great poses for a city based diorama if you were to inclined. 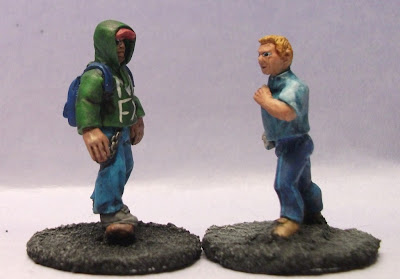 Hope you enjoyed this little review.   Not sure if it was noticed, but I believe this was the first time I failed to post two blogs in one week.  A major reason for doing this was that I was flying through my material too fast.  In no time I would have all my miniatures posted, and then the blog would come to a standstill.   I'm thinking once a week will be my posting rate from now on.  (At least for miniature posts.   I may come up with random ideas I feel the need to post).
Thanks for reading, and as always, comments are appreciated.