Happy Halloween everyone, and welcome to my final post for October, which concludes my postings for Zomtober.   It was a fun little thing to do and thanks to Leon over at http://pulp-citizen.blogspot.ca/ for starting it all.  So here we go, and in this case, I believe I really did save the best for last. 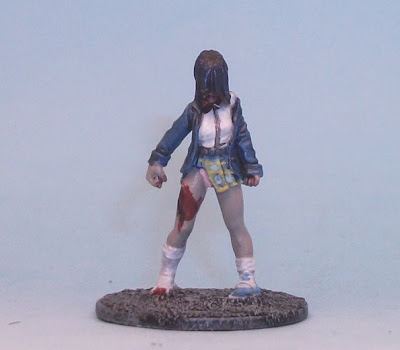 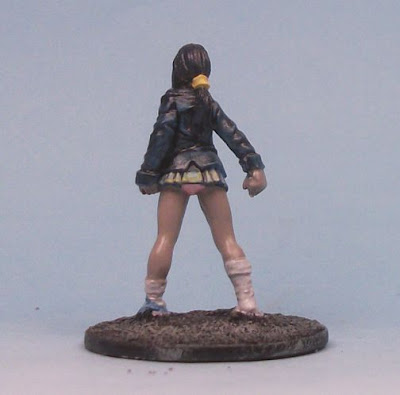 Hasslefree miniatures really are in a league of their own when it comes to detail.  They are a little more expensive than I'd like, but when you're only getting a few of them, I am able to justify it.  Here we have Suzi, who comes both in a hero form and a zombified for.  I don't have the hero version, as it is not as appealing to me, but man, this is one great zombie.  In fact, at this point in time, this is my favourite zombie in my entire horde.  She's that good.
Zombie Suzi is dressed much the same as her human form with a few minor differences.  She seems to have lost a shoe at some point, and her skirt is now torn revealing even more of her panties (pink in this case).   But what really makes Suzi a great figure is the pose.   It reminds me of something out of the films The Ring or The Grudge, neither of which are actually zombie films, but both feature creepy young girls with their faces more often than not covered with their hair.  I like to picture the heroes running around a corner to come face to face with Suzi here, just barely seeing her sneering teeth beneath her hair.