After my last post featuring the police force that would be defending the streets of Havensburgh, I thought that this post should contain some of those brave men who responded to calls expecting drunks or metally disturbed citizens, not zombies.   Here are my RCMP zombies.

Starting with the most interesting zombies on the left, an officer toting a severed arm from his handcuffed wrist.   Vampifan recently reviewed this set and deduced that the arm belonged to some other hapless victim due to the length of it being too great to have come off of this officer.  While I agree with that assessment, I do think the intent was for it to be the arm of this officer.  That is how I view it.  Perhaps he was handcuffed to a metal post or fence, as infection was overcoming him, and as a zombie was ever to severe his on limb to escape.  I like to picture it as such.
Next up we have the captain.  His youth behind him, this chubby cop used to command respect from his fellow officers.  Now he only inspires terror.  I really like the neck tie complete with clip on this zombie.
The following two zombies look quite similar and fill out the set nicely.  The fourth actually his a nice leg wound visible from the back.  I like that they both still had their caps. 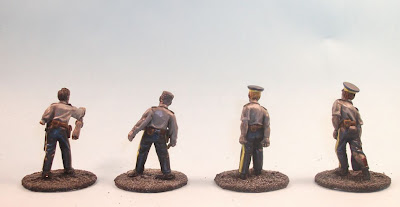 I didn't overly bloody these zombies up as they didn't have a ton of visible wounds (other than the severed limbs and the leg wound of Officer 4) and I liked the cleaner look to them.  They'll be getting  a lot of use in my first few days of my campaign, I suspect.

Any comments are appreciated.
Posted by Adam at 19:34