When the zombies begin to overrun the streets, many of the infected will wind up in emergency clinics and doctor's offices.   That would result in doctors being among the highest at risk for infection. And that brings us to this week's zombies from Grekwood Miniatures. 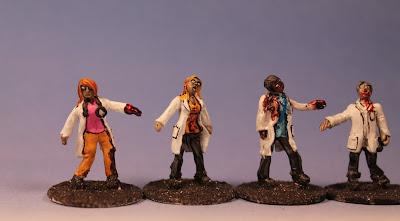 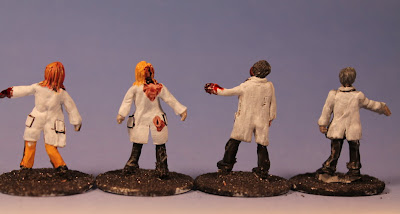 Starting on the left, we have a red haired female doctor.   Stethoscope still around her neck, she has only minor wounds, so I upped her gore by bloodying her hand as though she had ripped someone apart.  The blond female doctor looks pretty unscathed from the front, though I bloodied her shirt up anyway.  But from the back, she has a minor wound in the buttocks, but quite a gaping on to the back of the head.   It wasn't enough to destroy the brain, as she is still walking, but her hair has been ripped in that area, leading to a lot of blood loss.  Who knows, maybe the wound was from before she became a Zed.  The African American doctor has also been feeding, and bleeding a lot from the head.  He also has a stethoscope but it is mostly obscured by his blood loss.  I am a pretty big fan of his head tilt, as though he has just heard a sound giving away the location of his next meal.   The final male doctor is virtually unwounded, but has fed recently, and is looking to do so again.

As a group, I really enjoy this set of Zombies.  One can never have enough zombie doctors, so while these aren't the most original concept for zeds, they fit a role that every zombie gamer needs (and needs lots of).  These doctors are well sculpted, with great little details like lots of pockets, doctor gear and the African American even has a neck tie.

So I highly recommend them, and you can get them at a good price from Grekwood Miniatures.   It's a new company, so we should all support them (Though I'm sure many of the people reading this have already heard of them/ordered from them).  The end result will only be more zombie related sculpts!