The last couple of posts have shown some of a gangers from the streets of Mayhem.   This time we'll be looking at a different breed of criminal.   These guys aren't robbing folks on a the street, partaking in drivebys or holding up liquor stores.   That doesn't make them any less deadly.  These guys are more along the lines of multi-million dollar jewel thieves, intimidating and blackmailing politicians.   Here they are. 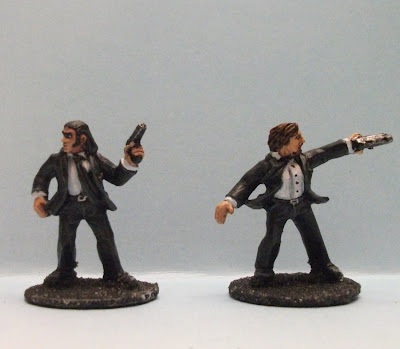 Two brothers in crime, they're names are Vincent and Victor (Vega?).   Clearly Vincent is a play off of the pulp fiction character of the same name and look, but I don't think I'll ever be using him as that character, just the name.   Victor Vega would technically be Michael Madsen's character from Resevoir Dogs (and Vincent Vegas cousin, I believe).   This miniature looks nothing like him, again I'm just using the name. 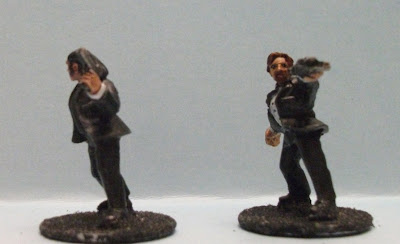 These two are both decked out in black tuxes, perhaps they were at a night out at the casino when the Zed apocalypse begins.  Luckily, they are both always armed.   Vincent has a nice BA pistol that should be good for dealing with survivors and zombies a like.   Victor, a little more on the wild side, has an MP5K for indiscriminately spraying down rivals. 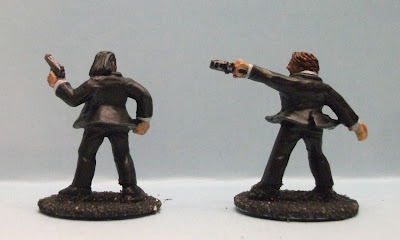 I'm a pretty big fan of these figures as I think Juno's Crew is one of Foundry's best sets.   These guys have a great theme together, and just scream organized crime   It would be my top recommended set from the site. Do be warned Val (from the last Juno review) is a significant amount taller than the rest.   Speaking of which... 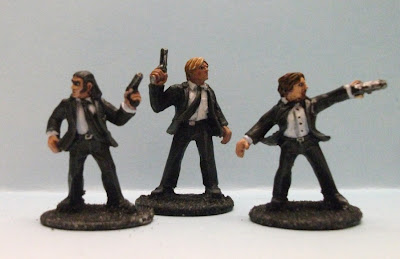 There's the crew, all three brothers as I treat them.   I picture Vincent being a bit of the smarter, leader character, Val being the strongest (he's huge) and while not stupid, he prefers to follow rather than lead.   Victor on the end has a pose that just screams Wild Thing, so he is the loose cannon of the group.   I think this trio would be a fun survivor group to play in ATZ.   I like their chances.


What do you guys think, all comments are appreciated.