Hello again.  This will be a shorter blog update because most of the things that cna be said were already said in the last post.  These zombies are more of the same, from the great Victory Force Zombie 50 for $50 deal.  Let's look at what we have this time.

A crew of five undead walkers.   You may notice that compared to last week, these zombies haven't been feeding as well.  In fact, only the right most zombie has any blood or gore in his mouth area.   That zombie also is severely lacking in wounds, so much that I considered passing him off as a living citizen. In the end though, I gave his face some blood and more on his hand, and he'll pass as a zombie just fine.
Second zombie is in rough shape.  He is missing his right hand, entire left arm and the skin around his left shin.  He is appropriately the most blood covered of this group.
The third and fourth zombies are both showing multiple wounds, and are leaking a lot of blood. 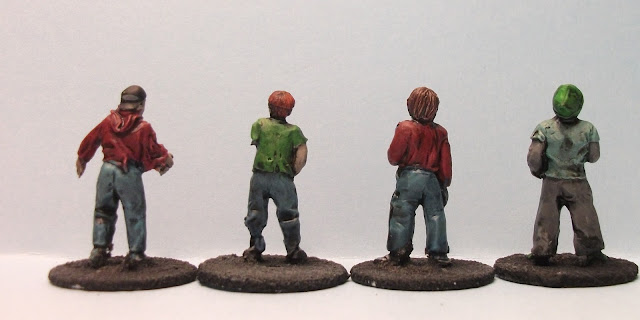 The backs of these guys made out a bit better, but that's not much to be happy about when you join the zombie infected.

And just a profile shot to show some of the wounds from the side.  I like this little set of zombies, and I think they'll fit into my horde just nicely.  I forgot to take a horde shot for this post, but will either edit one in here tonight, or make sure to have one for next time.
Thanks for reading, even though this was a bit repetitive.  I should have a good set of Bobby Jackon's Thugs or maybe some or Juno's Crew from Foundry completed for the next update.

All comments are appreciated.